With Christmas and New Year fast approaching, it is time for pet owners to focus their attention to the safety and well-being of their pets over the New Year celebrations.

We continue to be appalled by the bombing atrocities caused by terrorism and yet every year at the end of November, the UK happily celebrates a failed bomb attempt to blow up the houses of Parliament! The connotations of which I find simply astounding.  What other country would pay homage to a historical terrorist!

I continue therefore, to be astonished that fireworks are legally sold to the general public.  They are explosives and by their very definition, can be lethal in the wrong hands.  They wreak havoc with our countryside, causing stress to our wildlife and livestock and should only be used in the hands of trained Pyrotechnicians.

Pet owners are constantly warned to keep their pets indoors during the Bonfire and New Year celebrations, but what of our livestock and wildlife!  We cannot bring our 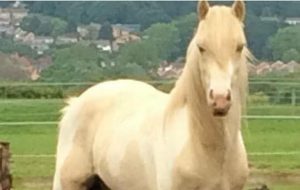 horses into the safely of our living rooms and even the calmest can be spooked during this time.

It is heartbreaking to recall incidences of horse fatalities.  More recently Nelly Shell, who was left heartbroken when her beloved horse suffered  severe injuries having become terrified and ran into barbed wire surrounding his paddock.  His injuries were so severe that she had to make the heart wrenching decision to have him put to sleep.

Karen Mills is also calling for a ban on the sale of fireworks to the general public, following the tragic death of her beloved horse, Shiloh.  He was found dead in his field, tangled in wire fencing.  His owner believes he was spooked by fireworks which led to the accident.  She also stated that there were nearby displays taking place!

What of the dangers to our environment.  November 5th is  the most polluted day in the UK calendar.  Rockets contain residues of unburnt propellants and colourants and some of this finds its way into our lakes and riviers.  Researches have collected airborne particles which were found to deplete lung defences which exceeded those from traffic sources which suggests a far greater toxicity.

It is common knowledge that the basic ingredient of fireworks is gunpower, however, it is the cocktail of chemicals and heavy metal that pose the most concern.  Barium  is the ingredient used to produce the vivid green colour, which is both poisonous and radioactive.  Rubidium, cadmium and other toxic components are used which can cause respiratory and other health issues.

In short, fireworks can unleash a shower of toxins into our atmosphere, soil and water.  Yet another good excuse to ban them completely.

The worse fear case I have seen during my years as a pet sitter, was a beautiful young Staffie whom we walked on an ad hoc basis.  He was a big lad, with a soft heart and a tail that wagged for England.  Imagine my shock to hear from his owner that on the lead up to bonfire night, he suffered a heart attack following what she described as supersonic booms and died shortly after.  Despite her best efforts at calming him, he failed to respond and I doubt she will ever fully recover from his loss.

Instances of animal cruelty also soar in the run up to Bonfire night and one cat was forced to have his leg amputated following what was described as a twisted attack.

Should we really be investing in products such as thunder shirts, and drugs to make fireworks more tolerable to our domestic pets?  My answer to that is no, since this is easily avoidable by restricting them to organise displays and minimising the noise that they generate.

Let us also look at the example set by country who are now insisting that fireworks are restricted to one day celebrations and are therefore using ‘silent’ ones. The Italian town of Callechhio, who employs a ban on loud pyrotechnics.  This was following a bid to ease sufferers of post traumatic stress, pets, livestock, children, wildlife and those of a nervous disposition).  Edinburghs famous New Year celebrations could also see a switch to a silent fireworks, an example that I hope will see many cities following.

I would also like to add the dangers of Chinese Lanterns, which have proved extremely harmful to our wildlife.

Lanterns are long been a symbol of beauty as they light up our night skys but they pose a significant threat and can cause fires.

In 2011 a roof fire was caused as a result of one falling onto a family home.  The fire spread to within feet of sleeping children, who were thankfully evacuated when a neighbour was alerted by the flames and called the emergency services.

These lanterns can carry for miles before they land and when ingested animals can suffer internal bleeding, leading to a slow and painful death.   Birds can become entangled in fallen frames, suffering stress and injury in their attempt to get free.  This can lead to starvation and marine life can be endangered by the debris falling into the sea.

Landowners are now calling for a complete ban following cases of injured livestock and fire authorities have united in their support.

The U.K is known to the rest of the world as being a nation of animal lovers, so please think twice before using fireworks and Chinese lanterns to celebrate the New Year.  If you simply must use fireworks, please consider the silent ones.