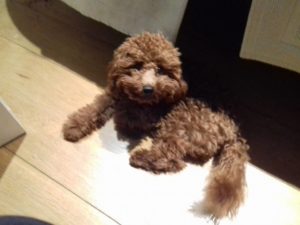 So peaceful.    And then  ….  the baby alarm sounded.  Moses the poodle pup (4 months old) had started to stir.  I dashed from the bed throwing my dressing gown around my shoulders as I ran into the kitchen and opened the cage door to extract the most adorable puppy ever born.    As I picked him up he started to pee, and continued to pee down my dressing gown until I reached the back door and then he stopped!

It was so difficult to put him down onto the cold garden slabs.  He was adorable and like a living teddy bear.  His pleasure at seeing me was so touching but his pleasure at suddenly seeing his partially sighted brother was indescribable.   Poor Magic was subjected to repeated attacks from this little ball of ginger fur, huge eyes and a never-ending licking tongue.

The days were filled with regular play times in order to tire out the puppy and lots of cuddles for Magic so he wouldn’t feel left out.   Moses slept regularly in his cage as he needed his sleep for his development.  Watching Moses was a constant job when he was out of the cage as any lack of movement in his legs usually meant he wanted “out” but didn’t quite get the message to wait. Making sure Magic was cuddled and soothed and placated was also a necessity.

Walks were an experience.  Magic being elderly was slow and meticulous in his smelling of every corner and paving slab.   Moses, on the other hand, spent most of the walk standing on his two back legs and waving his front paws trying to win the attention of all passing walkers.  Which he did.

This pet sit was such a pleasure.  During the week I noticed Moses’s improvement in toilet training and routine. 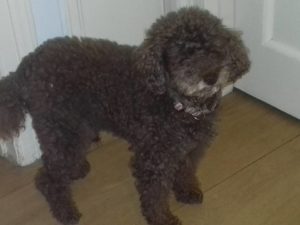 Three months later and the gorgeous poodles are even more gorgeous. Magic is still partially blind but may be considered a suitable candidate for eye surgery very soon.  Moses is now seven months old, still as adorable and a lot cheekier.  Night time cage is no longer needed and both dogs like to lie on their own blanket, on the floor, at the base of my bed.   Their gentle snoring is actually comforting and soothing.

Walks were determined by Moses whose furry face, huge brown eyes and wet nose would suddenly appear over the edge of the bed.  Whilst putting on Moses’ harness and Magic’s lead, Moses would grab the lead and excitedly pull Magic towards to door to hurry things along. Magic put up with a great deal of bullying from Moses but the playfulness will decrease in time.   Or will it?

My meals were taken in the kitchen whilst the dogs were eating.  This worked very well as they didn’t hurry their food in order to follow me around the house.

Pet sitting is an adorable hobby and job.  Why on earth didn’t I do it sooner? 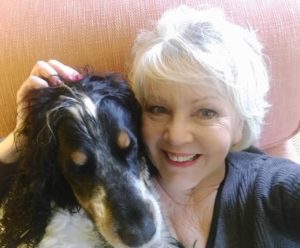 Maggie with another furry client