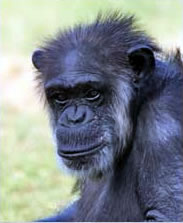 Chimpanzees used to live throughout equatorial Africa from southern Senegal through Central Africa to western Tanzania. This is an area almost the size of the United States and includes 25 countries.

Today, chimpanzees are extinct in 4 of them, and are down to such low numbers (100-200) in 5 more that their disappearance is inevitable. Another 5 countries have small, scattered populations of a few hundred. Only 10 countries have chimpanzee populations that exceed 1000. There are estimated to be about 200,000 chimpanzees left in Africa. Only 50 years ago there were probably several million.

In spite of their status as an endangered species, chimpanzee numbers continue to decline rapidly in those countries where wild populations still survive.

The primary threats to chimpanzees are habitat destruction and hunting. Local agricultural activities are encroaching ever deeper into even protected areas of chimpanzee habitats and large scale logging is now a major threat to the forest primates of Africa. Subsistence hunting of chimpanzees as a source of meat has gone on for centuries. But because of increasing human populations in previously undisturbed areas and a thriving commercial market for bushmeat, including chimpanzees, hunting is now a major threat to their survival.