When I was approached by a leading cat magazine to provide tips on cat behaviour, a lovely little cat called Lily sprang to mind. So rather than offer a list of my top tips, I thought I would recall the short but wonderful time I spent with her during the 6 years she was in my care. 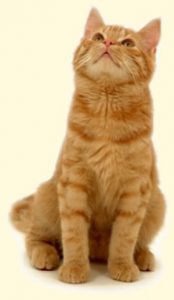 During my time as a pet sitter, I have come to learn that you do not chose a cat, rather they chose you, and although Lily was in fact a clients cat, she taught me most of what I know today, and I will be forever grateful. Her owner had warned me that Lily (one of two cats within the household), had an extremely fearful disposition with strangers, hence her reluctance to use a cattery.

Our first meeting was fleeting to say the least. I arrived briefcase in hand and was ushered into the kitchen, where Lily was in hiding. Our eyes locked for the briefest of time, before Lily leaped from cupboard, pulling a claw in her hasty retreat . I remember Judy, her owners concern, seeing little droplets of blood on the carpet. "Is she a rescue cat", I asked. To which Judy assured me that she was not and there was nothing to suggest that Lily had been in anyway traumatised during her life.

Lily was to be my biggest challenge. On my first day caring for Lily and her sister Angelica, I knew to leave her alone. Forcing her out of hiding would only reinforce her fear, so this was to be a slow process of getting to know each other. Each morning, I would enter through the front door, keeping her routine as regular as possible. In my experience, cats remain more confident when keeping their routines , but after a few days of continuity Lily was not for turning!

It was rather by accident, that I discovered something which was to be the turning point in our relationship. Some few months later, and on my third assignment with Lily, I entered the house singing. It was a beautiful Summer morning, and I was feeling particularly happy. It was nothing too loud, just a silly little song that I had adapted especially for Lily. Within minutes of hearing that song, she entered the room.

As any cat lover knows, they are complicated animals, and it is important to study their body language to understand their emotions. Lily was visibly relaxing. Her ears once back, were now erect and her eyes were soft and blinking. Lily was almost smiling. I continued to sing, whilst busily emptying the litter tray, when very casually she strode over and rubbed herself gently across my legs.

From that day, I always felt that Lily and I enjoyed a flirty relationship. Our song , I always felt to be an important part of our relationship, but in retrospect I rather think she was humouring me. In other words, she had responded out of pity, feeling that my hard work warranted her respect, but in truth I didn't care. The bond had been formed and she will always hold a special place in my heart.

Patience and education are the key to communicating with Cats. Unlike the dog who gives freely of their affections, a cats have to earned. Sadly Lily, through serious illness was put to sleep two years ago, but whenever I visit her sister, I can almost hear Lily laughing, and I still remember to sing our little song.

Written by Nina Cole of ninasnanniesforpets.co.uk