I wanted to find out why the mythical image of Canis Lupus is still haunting and why, even in modern times, he still holds the capability to evoke such passion. He has lived amongst us for thousands of years, and yet still he remains the most feared and persecuted of all wild mammals. 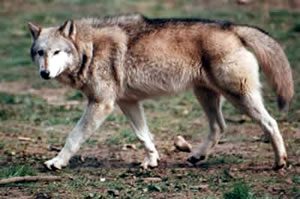 Most of the research on wolf ecology and behaviour, involves field studies, radio tracking and aerial surveys, and through the pioneering efforts of Dr David L Mech and other leading biologists, we now have a far greater understanding of this shy and illusive creature.

However, being a complete novice and armed only with a camcorder, a pair of rickety binoculars and a notepad and pen, I set off on a cold and damp February morning to Whipsnade Wild Animal Park for my first encounter with the Whipsnade wolves.

I arrived just after 8am in the morning. The park boasts some 600 acres, laid out in natural surroundings and luckily for me, Wolf Wood was only a few hundreds yards away from the main entrance.

I was thankful that I had remembered my binoculars, for they are an essential item to any field study and enabled me to identify individuals and observe behaviour at close quarters.

At Whipsnade, there are obvious differences with pack behaviour. Their food is provided and territory limited, but the social hierarchy remains the same. The pack consists of a mated alpha pair and their offspring. Only one cub had been produced that year, which contradicts the usual litter of up to six in the wild.

Diet consists of meat obtained from a local butcher, which is thrown into the enclosure at random, usually early morning between 8.30am and 9.30am before the gates open to the public.

On the fourth week of my visit, the keeper had wheeled round a feast of fallow deer. It was a park animal which had died the day before and following a post mortem to ensure that the carcass was free from disease, it was cut up to serve as a meal that the wolves may hunt naturally in the wild.

Two of the sixteen wolves had been injured. One a male, had been quite severely bitten and the wound was still bloody. It appeared that they were both higher ranking individuals and had attempted to mate when the alpha pair intervened.

The female had suffered similar injury through her exile had only been temporary, whereas the male, despite constant attempts to rejoin the group (this was done by intermittent circling around the pack), was persistently pushed back to the far end of the enclosure by the alpha male.

Throughout my time at the park, the outsider continued his advance in passive submission, yet the alpha’s reaction remained threatening. This wolf had obviously lost his status for good. As in the wild, the alpha male continued to assert his authority. He is most self assured and the only one to be seen lifting his leg whilst urinating. He often approached the public with a far bolder stance than his pack mates, with his tail held high.

There appeared to be rank relationships during feeding, they threatened and directed intimidation behaviour toward each other, and at times there were biting frays, but real confrontation was not observed at that time.

Body language is like a communicative signal which depends on the behaviour of his pact mates. Undisturbed, the body is relaxed whilst his ears seem to follow the direction of sound like finely tuned radar signals.

Although I had witnessed noisy confrontations during feeding, on no occasion did it lead to serious fighting, but I was intrigued to observe a lower ranking wolf defending a piece of meat. I thought it rather comical at the time, for facially he appeared threatening with ears forward, yet his hind legs were bent and his tail was tucked firmly between them.

During late morning, early afternoon, the pack went to ground which I found rather frustrating, so I turned my attention to the great British public milling around the enclosure. It was interesting to note the varied remarks from parents as they spied a wolf or two lazing in the undergrowth.

All too often I would hear songs such as “Who’s afraid of the big bad wolf”, but on the whole, comments were favourable and I was often approached for information by curious people as I took notes and filmed my subjects.

My study took most of that year, and was a unique opportunity for me to observe wolves in a much greater freedom than the confines of a zoo.

For conservation to be successful we need knowledge and understanding. My study was only possible with the help of Whipsnade Wild Animal Park, where they continue to enjoy the protection of captivity.

In an ideal world, the wolf should be left where he belongs, in freedom, but it is extremely difficult to change the opinion that this earth is for humans and all else should be subordinate. Whatever their outcome, one slow floating howl through a midnight sky still holds the ability to set even the faintest heart aflutter.